“there he will leave his unique brand, a work that looks for different and exciting ways to express his vision of space and that constantly challenges the technique of stencil, resulting in complex and exciting works, which also reflect the conflict between the rigid geometry and natural way of being human.” 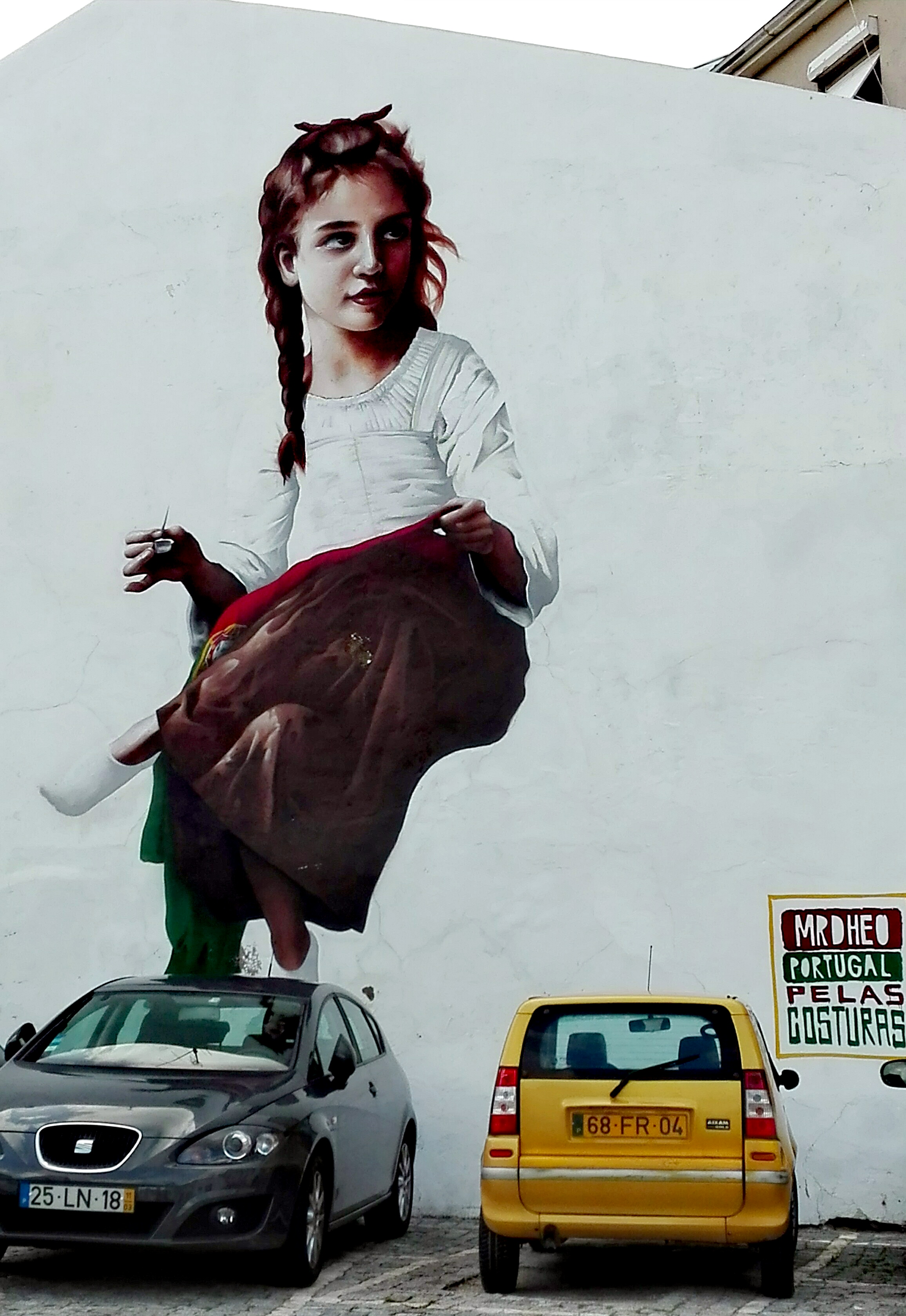 If you intend to visit the second biggest city in Portugal you should be ready to enjoy good food and wine , the famous Oporto Wine have their cellers here , on the left bank of Douro River there are plenty of good tasty spots of this precious .

The city itself is very beautiful, is one of the oldest European centres, and its historical core was proclaimed a World Heritage Site by UNESCO in 1996.

We can find a large number of very good artworks all over the city from Portuguese artists but also from international ones , however nearby Porto , in a place called Senhora da Hora , very easy to reach it , there are plenty of tram lines which links city center with Senhora da Hora Metro station , we can find Movimento Flash ( Flash Movement ) , this independent movement is curated by Filipe Granja and it started in May 2016 , every single month Filipe invites a different artist to paint and give color to a small part of the Football stadium wall of the local team .

@doresdefome was the first one to be invited and it’s artwork ; “ O Errante “ , reflects someone who always travels without a destiny , always guided by the train lines , which will show him all the world ,

“ Metro “ was the second artwork made by @feio_porco_mau , this is a project that portrays a geek kid who loves small trains but it is also likes a parody due to the relation between trains and graffiti

The third artwork was made by @­_hazul_, a very wellknow Porto artist, we can find a lots of his artworks in old part of the city , this one is called “ Outrora “ and is a reflection between elements and time .

The first international artists who came to Flash appeared on August ; the Brazilian @bellasrio and the American @justinphame made “ Trains on the Brain “ , this artwork depicts a man and woman lying down, facing each other, with a train coming out of their heads, as if sharing the same dream.

“ El Boze One “ artwork was made in  September by @pauloboz ,  this artwork tries to reflect artist lettering style as well as it tries to bring some expressive figures to his lettering.

The Porto artist @godmess made “ The Prince “ artwork in October , and in the last two  months of 2016 @marianaptks and @heitorcorreahc made “ Concreto Abstracto “ and  “Sabat do Saber” , with Mariana’s artwork the artist makes a question to all of us ; What is concrete and what is abstract? The answer to her question arises within each of us, incited by the inflamed colors of a reinterpreted cosmos, whose fragments hover on the threshold of dimensions. At “Sabat do Saber” , the artist was inspired by a Portuguese novel “ A Rosa de Paracelso”, by Jorge Luis Borges, this novel represents a celebration moment to the value of learning and learning along the way. A communion of thanksgiving for every step made, and every slip; achievements and failures. Extremely opposed to the alienated cult of the law of the least effort, empty of dignity, the scene is based on a stimulus of encouragement to ethical character, meritocracy, and recognition of the love of life and nature.

In the beginning of 2017 the artist invited was @mesk85 , a very wellknown artist in Porto due to his mice all over the city ; this artwork “ O Caminho “ try to show us that the The right path is not always the right one.

Well , who comes next ? Filipe didn’t told us , but for sure he will give a chance to someone from the neighbourhoods and the artwork will have a message to all of us .

I hope you enjoyed this description and also the photos , if so , Filipe and Porto citizens are really keen to receive you all ….

The Graffiti Art of BK Foxx