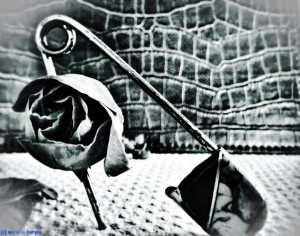 When she stirred at the crest of sunup, she felt a pungent sensation around her nipples, as if they were overly ripe berries teetering (but just barely) from fat, irate shrubbery. And if that itself was not enough, there was a newfound immensity around her waist. A large bauble of fat extended her bellybutton like a pinwheel. She poked the girth and round and round it went.

There was also a despondency, mixed with an attentiveness to matters undeserving of prior acceptance. Things that belong on the other side of the tracks crossed over. Thoughts of a stunted self- worth and forced objectification, what could have been and what was not- became catalysts, interesting, maybe even true.

She dove to the edge of her bed, dividing her silk sheets until her trunk felt air, heaved her posture upright and leveled both hooves on the gray Berber. They looked like manic, wilted lilies, her toes: lima beans atop a mound of puffy, saturated cabbage.

Suddenly the stars were misbegotten. The despondency drifted further in and settled over her like mist. Lightning struck then struck again. 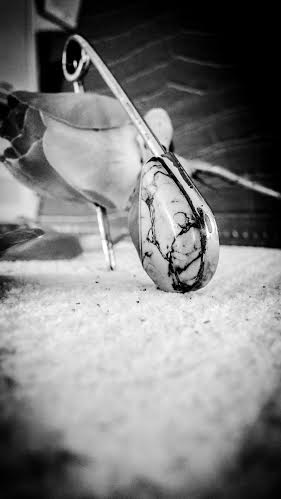 She massaged her temples, wrapping her palm in a paste of overpriced makeup applied last night, with no regard to blending or cost. She bit her lip and sucked dried lipstick, a fuchsia shade, only really appropriate for a job interview at a temp agency or a cheap blind date. She glowered upon her nails and saw antagonistic polish angling an already-heavy, neatly-manicured hand in the direction of ‘so-called’ sin.

She felt the need to gobble bad food, to make or maintain no promises, to abandon all regard for vigor and well being, to become further unhinged by sodium and MSG.

She wanted to climb into a lotus position. A chocolate crème donut and an order of slimy fries tucked in her mouth as she waited for the deluxe pizza’s, speedy or free delivery.

She hated most things including herself. She felt the dirty want to inject calories, fat, carbohydrates and sugar intravenously, to hoard time and effort, preserve it for frying sausage and dipping pigskins in tepid Velveeta.

She planned on using her intellect to devise further methods of identity degradation and ego debauchery-ones the culture of dominance may have missed or forgotten.

She would seize everything that the liberation movement had strived for and dismember it piece by piece, like a derelict hyena. She couldn’t handle the pressure. There were too many expectations. Round and round it all went, over and over again.

She needed to retaliate

She had an idea..

She would eat that one woman’s, large globular sunglasses, salt and pepper her gristly tresses, slowly boil the feminine mystique for several hours in a wobbly crock-pot and cover the stew in garlic-butter, hot sauce and burnt bras.

After that she’d spread that other woman’s afro on a piece of sesame melba toast, knead her rage just beneath the surface and roll her clever strength in organic sugar, allowing the levity to mingle with bacon grease and cream cheese, absolutely no vegetables, and a double serving of carbohydrates.

Her landscape had shifted. The view – neither clear nor cloudy; a place of stark truths and potential.

She could see she had finally done it- crossed over and become something else- stirred that diminutive element. The one which women have and resent themselves for — the self they wrestle with and from.

There was only one regret.

She wished she had done it in purity, in piety and outright fucking beauty 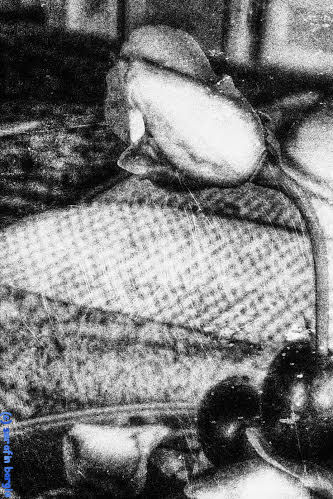 Serafin Borgia is from Prescott Valley Arizona and legally signs her name Amylynn Albertson (for now). She Has an M.F.A. from Norwich University/Vermont College .

Sleeping With Sirens in the Window

Poetry and Art by Tilla Sonrise  as we awaken from …