My name is Abby Hagan. I’m originally from Houston, Texas, but am currently based in Seattle.

How long have you been making films and when was it you first realized this is what you want to do?

I’ve been making short films since 2012. The first film I worked on was called “Share, Fight, Care: The Story of Houston Food Not Bombs,” which documented an organization that shares vegetarian food with Houston’s homeless community. It was the first time that I realized that you can have fun creating art while concurrently instigating change and progressive conversation within your community.

What you find the most satisfying but the most exhausting about film making?

Sifting through hours and hours of footage, and slowly watching a cohesive story emerge.

Who are some of your favorite film makers?

If there was any one person at any time that you could create a film with who would it be and why?

Anthony Bourdain. Not only is he an immensely skilled writer, host, and producer, but he also has this knack for exploring culture in a way that perfectly balances the simple topics of human existence, such as food and family, with more serious topics of war, poverty, and discrimination. Or Peter Jackson, because I’m obsessed with Middle Earth.

How do you describe your film style and what is the message you are bringing to the experience?

I suppose that aesthetically I’m still in the process of developing a visual “style,” and am always on the quest to figure out how to add more dynamism to the look of a film. (For example, the current piece I’m working on is a partially-animated documentary, something I’ve never done before.) As far as content and methodology, I attempt to remove myself as much as possible from a final product, really highlighting the individual stories that are being told. I think that there is a huge power in one individual’s personal story that can plant the roots for tackling broader topics.

What has filming taught you most that keeps you doing what you do?

There’s this very specific moment – and it only accounts for about 5% of the total process, in all honesty – but there’s this moment when you’ve finished an entire day of running around shooting and conducting interviews, when you’re sitting on a sweltering porch in Honduras, or Haiti, or Vietnam, and you’re clicking through the images on your camera’s screen, and you see a story begin to develop. Your fingers actually twitch with the desire to put the footage onto your hard drive and open up your editing software. You’re tired, and covered in dirt and sticky sunscreen, but you’re immensely satisfied.

What advice would you give to someone who wanted to have a life creating film?

I would say that one of the biggest challenges that a new filmmaker has to overcome is learning how to be comfortable with the unusual work patterns of filmmaking. Sometimes you’re so busy that you feel like you’re going to claw your eyes out, and sometimes things are so slow that you don’t know what to do with yourself. As of right now, producing docs is a side gig of mine, so learning how to manage your time (the evenings, weekends, etc. spent in cafes) is absolutely essential.

What are you currently working on?

I’m currently working on a short documentary called “Wall of Complacency,” which documents the immigrant and refugee populations of Houston, Texas, and what community initiatives exist to support these groups. It’s a partially animated multimedia piece that I’m working on with a fantastic artist, Lisa Jaech.

“Wall of Complacency” Trailer from Abigail Hagan on Vimeo.

Lastly, is there anything you’d like our Section 8 Magazine readers to know about Abby Hagan?

I’m obsessed with puns. I like to say that I have puns of steel. Also, I follow a raccoon on Instagram named Pumpkin. I recommend everyone do the same. Finally, you can check out more information about my current project at facebook.com/wallofcomplacency 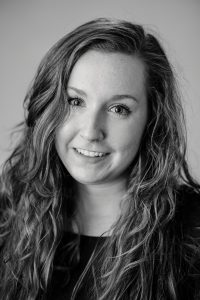 Welcome to our planet