After work at the Strand, Shalom would have something to tell her boyfriend, Diego Rostein. Diego had taught her everything so far. It was crazy how smart he was.

Diego had dated a few stunning fashion models, in Europe. She met him, after she placed a Voice article asking for a photographer.  His favorite period was Art Deco. His ancestors survived the Holocaust.

She showed up at his 88th street place. She rang the doorbell, nervously. Was she tall enough? Or thin?

A man opened the door, wearing glasses, he had an immense hawk nose, shaking a little delicately, holding a portfolio of German models. There was a girl in the background wearing black lingerie. She exhaled cigarette smoke, unsmiling, and shrugged on her jacket and dress and left, coldly.

Shalom stripped quickly. She wore a white ribbed tank top, and boy shorts. He looked at her, she looked at him, and she thought: this man knows me.

Diego completed a ravishing dozen photos that the Suicide Girl site eventually accepted the next month!

One of her on her back, in his posh uptown bedroom, in a red silk teddy, her favorite. She thought of his parched mouth on her long neck, the way her beautiful red silk teddy had slid off her like a piece of the past she never wanted.

The way it was when you fell in love or in destiny.

All the East Village boys had a hankering for the new model girl, Shalom.

Who told dirty jokes that could border on kitsch. (“Parsley or something else? Both taste bad!”) Who wore a kerchief on her short inky black hair. And those eyes! They were big, American blue eyes, the baby blues that turned grey in winter. (From a Velvet Underground song: “Pale Blue Eyes.”)

And there was the perfect beauty of her name: Shalom.

It was not a Hebrew name: her Presbyterian parents just liked the sound of it. She was a beautiful fair girl in coloring, a Midwesterner, but she dyed her hair.

It all started with the Village Voice.

The Village Voice wrote a profile of The Strand bookstore, in 2004. Supposedly it had it’s bigoted issues, a tight union, escorting customers out for no racist reason, a pyramid of evil basically, heralded by it’s doyenne of destruction: Stella Gobster. Shalom flipped through the article, and shoved it into her denim bag, knowing it was all true. And unsure what move to make.

Small world, Shalom! Marty cooed, tugging his rock star t shirt under the leather jacket. It was fake American Apparel. He was a nice Irish boy, who was now bored and sullen.

Shalom was a bad girl now, a short- haired beauty with a tight paisley thrift blouse in the right places.

You betcha, she said, with her Midwestern twang.

Let’s meet for a coffee. Are you still dating Carl?

No. Mr. Stefanoso turned into a complete dirtbag.  He has no friends, and does drugs.

She stepped away from Marty. He stank. And growing on his chin was that mangy tacky hipster beard. She felt alienated: he was something to leave behind.

“Definitely! It sells a lot, almost as much as Daniel Clowes. He likes fat girls,” the girl murmured. “Not that you would appreciate that. You’re so skinny!”

That night a month ago, she stood in the middle class kitchen, with the flush of summer on her, telling them she was going to be a model in New York.

Minnesota was a Norwegian town. She told her soft -spoken Presbyterian parents of her plans. She looked out the window. She could see the stupid cookie cutter homes: a teenage girl, blonde as the Midwestern tend to be, sun tanning in a halter top. A country bred girl with one of those almost bovine, obedient faces, and very pretty at angles.

Two months later it was like, so, so different.

It was 2004, and the year of Mayor Bloomberg. And almost every person was a total jerk now. She looked like all the Upper West Side urban women: drained, skinny. The 70’s urbanite Brabara Hershey look, especially with her dungaree jeans and super tight, knotted t shirts and dark curly hair. It took a certain man to appreciate such a look.

Walking after work, she passed Michael Musto on the street corner. He raised his nerd chic eye-glases and grinned at her. She shook, like a lightening stuck her right then and there. He thought she was pretty.

After work, she met Diego at Michiko’s for uptown sushi, near Columbia University.

“Nobody likes me. Just you and my boss, Stella.”

She was whining. Blondie’s “Heart of Glass” was playing in the background.

She released her bun from it’s tortoise-shell barrette. Cinematicaly, the black hair sprung to life. He touched it as it spiraled in soft waves to her chin. A model’s haircut. He was a German man with the Jew gene. How could he resist that hue? Or the full cheek-boned beauty that was strong as Debbie Harry’s at her peak?

Diego stared at Shalom’s coarse tresses, and then the photographer reached across the table to wind a lock around his delicate artistic fingers.

“You’re funny,Shalom. You and your mouth. This is Bloomberg’s New York.”

“The year of Bloomy? Gimme a break, Diego.”

He touched her shoulder. She snarled. She was a little rude with him, but she was a bitchy girl now. The Strand taught her that. An Frank O Hara poems.

In one way she was relieved the ten foot blonde model- beautiful waitress was rude too.

“I wonder about you gorgeous little Dutch Minnesota girls,” he purred. “I don’t think you ever become New York. I think you stay –”

“Stay what?” she snapped.

And she laughed, boisterously.

“Spoken like a true German.” And she sweetly dipped her fingertips in the wine and reaching across the table to offer him the fingers on his mouth, marking her sensual territory.

She walked closer to the NR then took it the Strand on 13th. The lights of the skyscrapers would turn on come nightfall. Marty was probably still at work, working the night shift. Carl Stefanosos was teaching, wherever he was, and had probably scored a new younger girl, at his grad program our West.

She didn’t want to get all Henry Miller, but it was a true night moment. You knew who to vote for. Where to eat the best Greek. Even if you knew it was a lie, with a woman’s coins in her pocket. 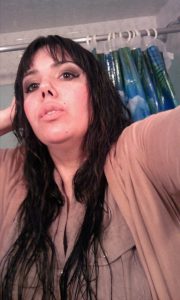