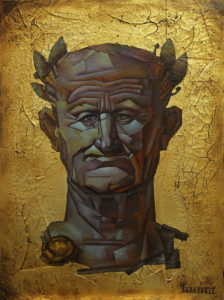 After Governor X won in a landslide, he divorced his wife and married his Chief of Staff, a stunning redhead, who’d been married to the Minority Whip until it was alleged he’d groped the daughter of the director of the Department of Human Resources because the director refused to hire the Minority Whip’s sister.

The sexual assault reportedly took place during a fundraiser for the Governor’s opponent, Candidate Y, who, upon losing, became a lobbyist for Free the Caged Birds Federation. After he was unable to secure enough access to satisfy his clients, his body was found peppered with peck marks and droppings, the coroner ruling the death a homicide; alleged perps on the wing.

The Governor’s ex seduced a state trooper to get out of a ticket, their sexual acrobatics caught on a surveillance camera installed by the Governor convinced his ex had stashed $1,000,000 embezzled from the Governor’s law firm. Rather than pressing charges, attorneys tried to intimidate the Governor into steering contracts to them for bogus infrastructure projects.

When the Minority Whip’s sister was refused employment by the Department of Human Resources, she sued for discrimination, claiming she had a wooden leg, which was true, but she also had two functional legs. She lost her case which was adjudicated by a female judge who had been born a male.

Judge F was involved with a former Olympic Gold Medalist from an unnamed country in Eastern Europe, which hired the beefy shotput-hacker to steal State secrets. Discovering nothing of interest except padded salaries of political appointees, he was stripped of his citizenship. He fled to America where he met the Judge at an LGBT convention.

After ten months and six days, the Governor gave a farewell speech at Jo Jo’s Donut Shoppe while munching a cruller. He apologized for leaving the State rudderless, but he’d given up trying to focus the Legislature on the pressing issue of cops who earned more in drug sales than in keeping streets safe.

His decision to resign was sealed when his current wife, the redhead, ran off with a grafter with a magnificent mane of dark hair, thus humiliating the Governor who never derived any benefit from applying Rogaine. He shaved his head, bought Precious, a Rottweiler, and married an ex-pole dancer. Recently, it’s been reported he’s opened a used car dealership in Cincinnati.

Interview with an artist : Etienne Grinter

” This is my first interview and I’m a little …

The Language of Flowers

Art & Poetry by Jennifer Chester Thunder travelling along the foothills and …