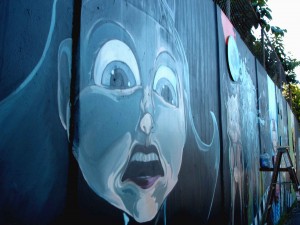 My name is Xavier Lopez ; I was born in Southern California, half-way between Hollywood and Disneyland.  My first memory is of the warmth of the California sun on my cheeks and visions of the bright blue sky overhead as the song “A Theme From a Summer Place” played all around me in the background of the car radio. From birth, when it came to telling the difference between what was real and what was make-believe–I never stood a chance!

I came from a family of three siblings and when we were kids we used be left alone at the Hollywood Wax Museum and auto museum and would spend literally days staring at the Batmobile, Bat-cycle and full-sized wax models of old Hollywood stars. When we got home we would make Batman and Robin costumes and fight invisible bad guys until sundown.

Disneyland was such a prevalent part of my childhood that I actually remember nightmares of the Haunted Mansion before I even remember having been old enough to make sense of the ride. My father used to taunt us by saying, “You’re nothing but a nothing, you’re nothing but a nothing…” which was a song from some scary Disney cartoon. He would also take our stuffed animals and trick us into believing that they were alive–though my brother who was always much smarter than I was never fooled.

There are many layers to my work, I want people to see my work as a questioning of reality, of culture, and of traditional ideas of gender and race. I am absolutely obsessed with the moment in all media when Pinocchio comes to life–the moment when the inanimate becomes animate. That for me is the true moment of magic. At the same time, I tend to think of life as a giant horror movie–grisly and visceral. I tend toward Lacan, Bakhtin and Balzac–rather than Kant, Hegel and Disney–though I understand their places in normative culture–and how we navigate the world.

At the same time–even when I am employing elements which may seem to be very painterly or Pop–I am still always a conceptualist at heart. I think that historically, at this point in time, we are actually post-pop (once again)–and that that is an amazingly generative space for an artist to be in and to work from. I don’t like things to be clean, pure and delineated and it is my goal to marry all of the various strands of my own work–the performance art, sculpture and the pop together into something new–something that we might not have ever seen before.

Pop, itself is amazingly important because it has always had the ability to make even the hardest ideas easier to take and I do have lots of very complicated, dark, happy, manic, beautiful and ugly things to examine and say in the work. Also, because pop has the ability to make the strongest of medicines go down, I don’t think that it will ever completely leave my work–but will rather take its place alongside the more minimalist and conceptual aspects of my work in a working mix and become another tool in my toolkit.

Do you remember your first artwork, when you knew that you where an artist?

There have been several moments in which art has saved my life–in which it has reminded me that there never really was any other choice for me. Any true artist knows that they really can’t do anything else–I’m pretty much not good at anything else-really. As far as the first moment–it might have gone all the way back to watching my dad painting murals in Hollywood, standing atop a ladder with a crowd of people complaining that what he was painting wasn’t art. He looked down at them, paintbrush in hand and said in a very thick Chicano brogue–“Thees, thees is not just art–this is revolution!”

I still have the very first drawing I ever did–it was of a train and it is probably better than anything I have ever done since. Maybe.

Robert Rauschenberg was my first favorite artist who didn’t illustrate comic books and Mark Ryden took me on a trip for awhile that I am still dealing with. I love Bruce Nauman and did my graduate work at UCDavis–where he attended classes and did performance work. I used to sneak into classes that were taught by late first wave Pop artist Wayne Thiebaud and I really think that you can see the effect that his classes had on my brushwork. 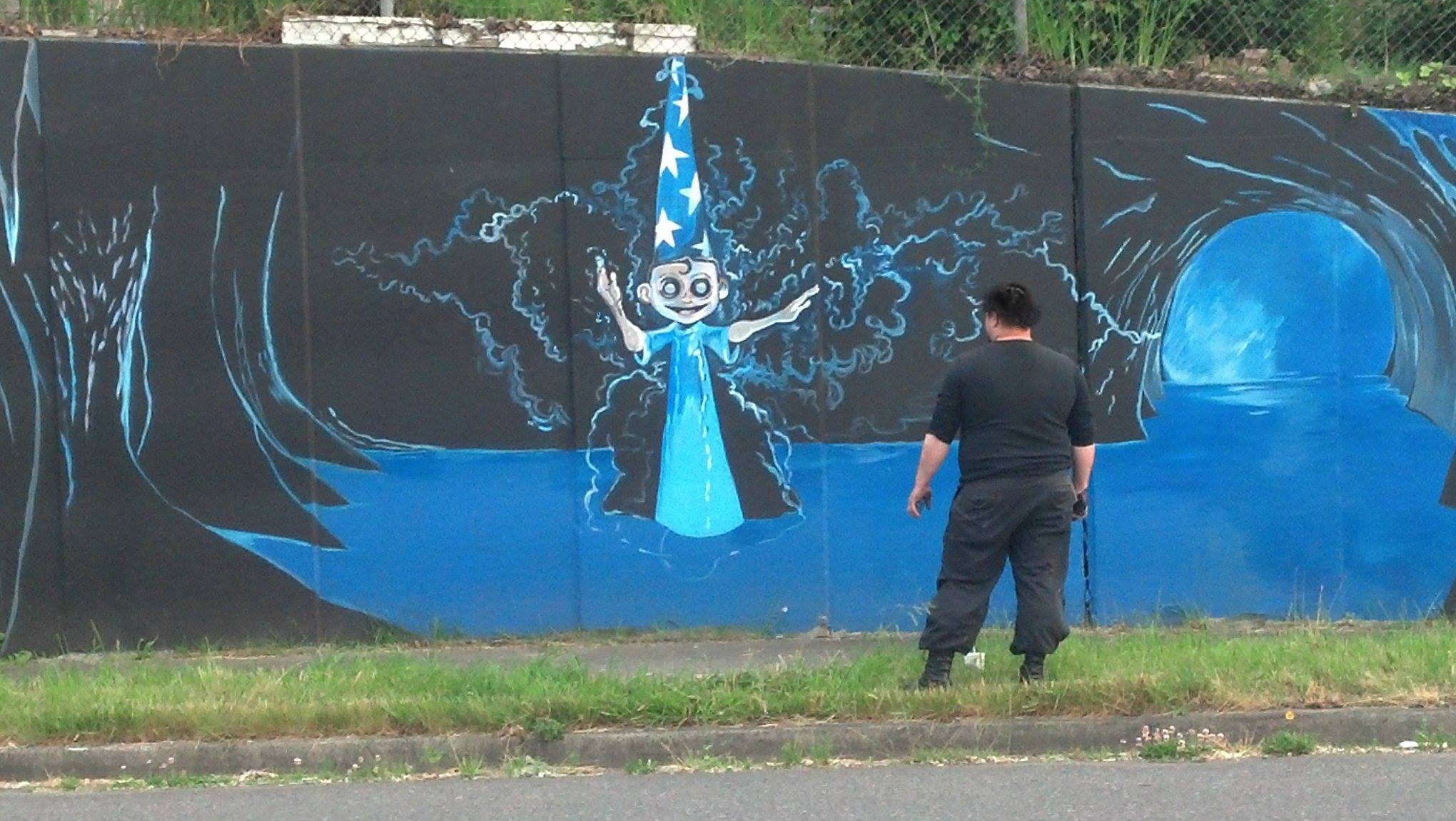 What tools do you use, to create clean paintings and murals?

Honestly, I tend to use whatever materials I need to in order to communicate what I am trying to communicate. For the murals it’s usually a lot of paint and brushes, for the performances it is often latex, masks, costumes, cereal, music, etc.–for the mixed media sculpture–it’s all over the map!

I don’t think that I really have any allegiance to any particular set of tools. I use what I need to use in order to say what I want to say!

Where can we see more of your art? What other places has your work been published?

I have a book coming out in the summer that will be available on Amazon and my work will be in the next issue of Studio Visit Magazine. I always have some sort of drawing or painting in the books printed by Raven Above Press–and I have even had work in Mad Magazine. I continue to do “Live Painting,” and performative work with the awesome folks over at the Seattle Art Museum, alongside fellow muralist Ryan “Henry” Ward and he and I have a few projects set for the future that will definitely get people talking.

As far as collaborative work goes, look out for at least three performance art performances this year, the first will be a musical love story– based on Marcel Duchamp’s glass and mixed media piece, “The Bride Stripped Bare By Her Bachelor’s, Even,” and two which are based on characters of mine–the “Dum-Dum Boy” and the “Sorcerer’s Apprentice.”

My work is always available at Echo Gallery in the Greenwood Collective– and online at my terminally “under construction” website at xavierlopezjr.com. 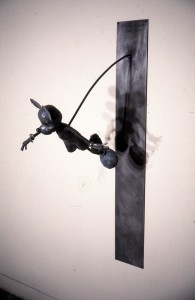 Honestly–I just want to do more and more of what I am doing–take things to their limits and grow–I want to see where all these directions lead and how they connect and dissect. I used to think that the Pop stuff I have been doing for the last several years where a break for me –that they had nothing to do with the previous work. That is until I actually looked at the older work and saw that all of the same obsessions were there, the same connections, the same tropes and contradictions and that they were all connected through me. It was a transformative realization and one which continues to surprise me –I want to surprise myself continuously and always continue to keep everyone guessing about what I will do next!

I would love to work on a performance with Joseph Beuys–of all the artists throughout history–his is the one that I seem to come back to the most–visually, we share some striking similarities–which is odd–because for both of us the performance work is extremely personal, autobiographical and anecdotal. I’m sure that Beuys himself would say it has something to do with a kind of post-Jungian–artistic collective mind–but all of that is just a little too new agey for me–though I love Beuys for being so out there and for being so willing to go out on a limb for what he believed–no matter what!

Be true to yourself. Even when everything seems to go against you–because that is when you will find out who you truly are. Too Zen? Too new agey? Yeah, you’re right–I am nothing if not a jumble of contradictions!