Photography and Story by Mark Venaglia

The number of Manhattan Eighties artists calling me a “Sellout,” which is the more internet-pc version of what they really began to call me…a more common word that sounds almost like bore, which is what this group of PissOnRealSuccess artists became. Amazing how quickly they all faded away when I wrote my first check as a donation to a local charity that I, personally, believed in and had watched struggle along for years- just as I had.

The genius artists of Pompeii and Herculaneum are an example of an entire thriving artist’s culture, transforming entire walls. And they were paid for their labors. One of many fantastic examples of Graffiti Artists throughout Art History. And the term “whore” comes into play, again. In a minute.

Making money means that we, as artists have to learn about saving money, being responsible with our money and many other related things none of us were taught. The staggering amount of work, the dedication and exuberance to clean, tight technique that I continue to see lavished across the exterior walls of the world- all of this LABOR deserves to be acknowledged more by the hour, and no just by the act of scrolling.

The editors of Section 8 felt that if I were to share of the real history of what is now rebranded as Street Art- that might be a good place to start. They and I want to see all artists making work that endures and sells for vast amounts that go right into your own pockets- providing health coverage and a savings account and generating long, productive careers. Unlike the cave-painters of Lescaux, whose typical life expectancy was 20 years, an artist who lives and makes art into their 90’s gets the chance to advance the entire movement, making genuine artistic discoveries over the course of 40-60 years.

The interior frescos of Pompeii paved the way for the illusionary murals of Versailles. And in the prehistoric subway tunnels of Lexcaux, France the entire Graffiti Street Art Movements were born. 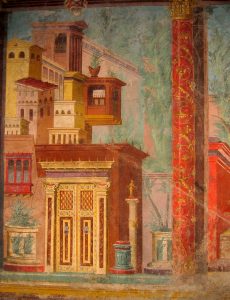 We consider both the coast of Italy and the Parisian suburb of Versailles because in both these environments – people other than artists began to notice the art and experienced the first sophisticated responses that indicate a sense of Culture. The detailed, wacky, altered perspectives within the mythical cities depicted throughout Pompeii are lifted right out of today’s urban streetscapes. But those Pompeian artists were busy BEING HIRED to transform flat walls into seductive flights of visual fantasy in 79AD. That is 79+ years after Christ is said to have died.

The next time you’re inspired to consider yourself a mere whore for accepting a fee for your labors, please remember Mrs. Jesus Christ was also a working girl. Speaking of Jesus-pretty good company to be in, in my opinion. “Art is Mark’s religion,” proclaimed one of the many art dealers I have worked with. To devote as much time and W.O.R.K to the epic, public masterpieces we consistently see, makes me feel that the majority of Street Artists do, absolutely, have an inner spiritual life. That particular dealer, who recognized my deepest inspiration, also provided me with the incredible experience of catching him red-handed taking 100% of my money. I was inspired to do something about it besides retreat into a cave. 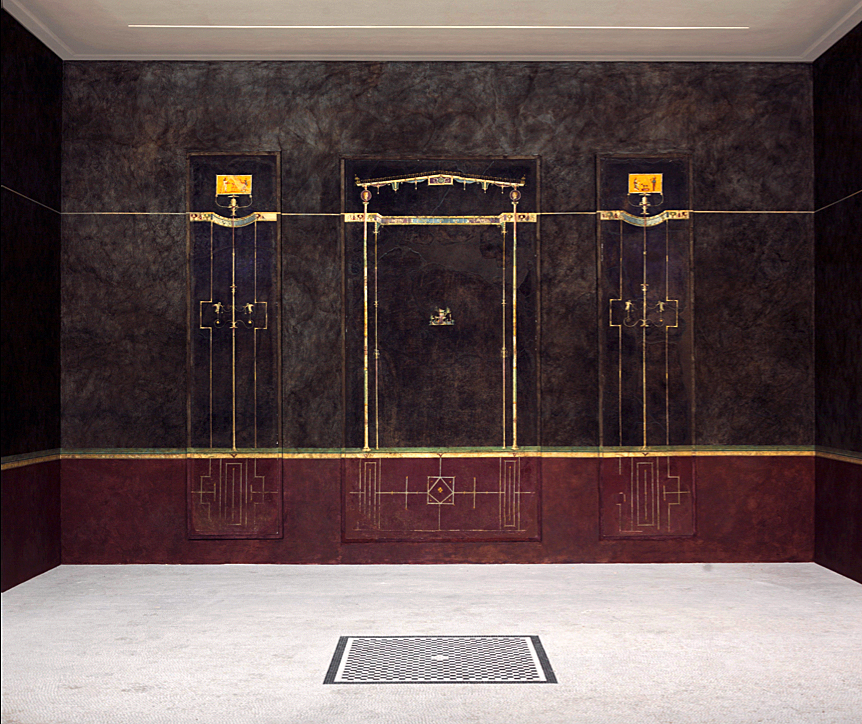 The Pompeii Room at The Met Museum in Manhattan, we are told, was dug up and transported in slabs, across The Atlantic. Reassembled in NYC, and “slightly touched-up” by local artists as recently as the 1970s. Like most New York apartments of the last 200 years- only one window. Please note a clue so obvious, 99% of the experts ignore it- to the immediate right of that window:  one bowl of fruit- quince in fact, and possibly figs. Better-informed historians tell us the original Garden of Eden apple was, in fact, quince. Such a powerful DawnOfHumankind aphrodisiac that when quince is simmered carefully, between the aroma and eating it, makes even the most frigid priest or nun howl at the moon, speaking of religion. And the worship of Eros.

Artwork by: Eric Lawrence Baldwin Fiction By: R. I. Tuesday …