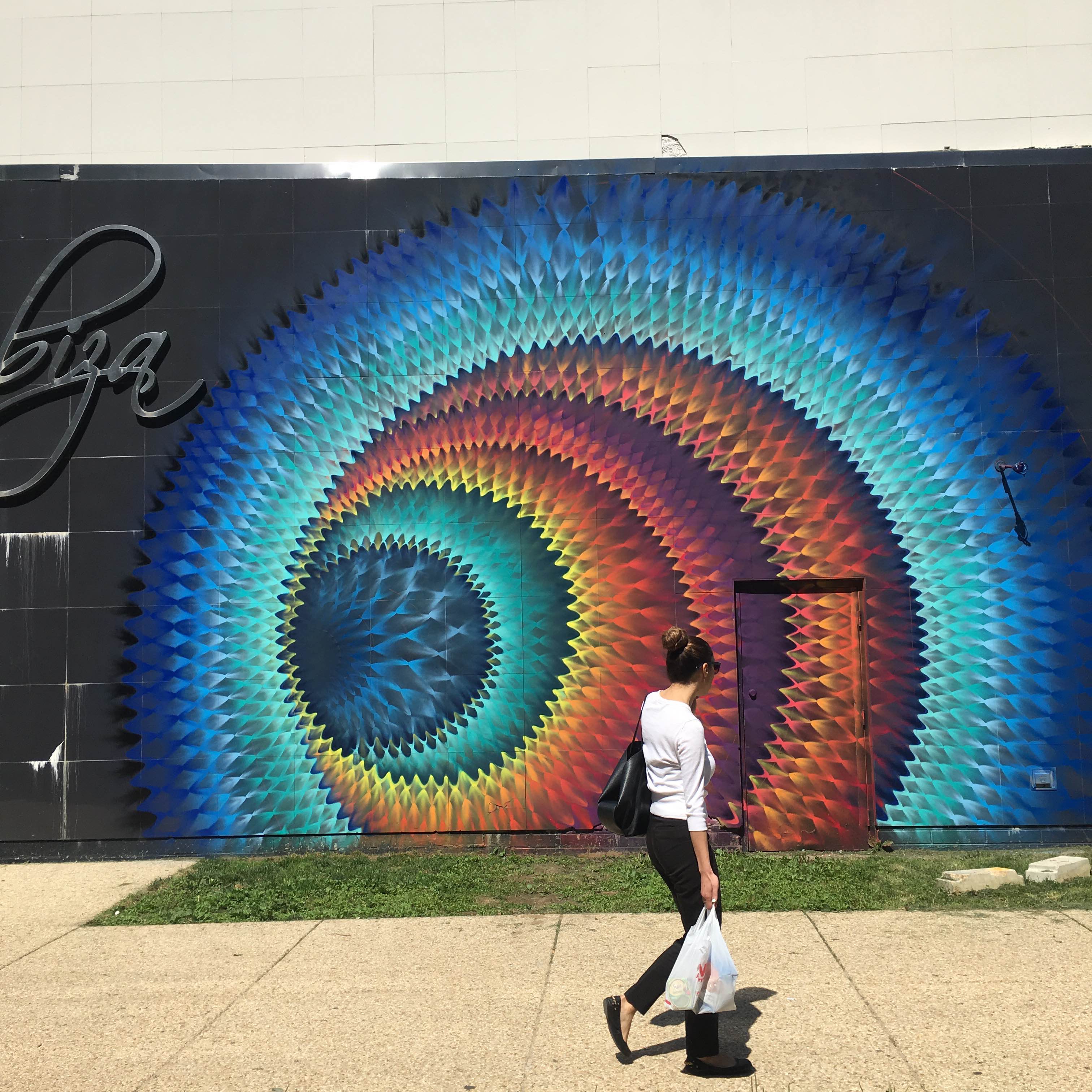 (Continued) “The Pompeii Room at The Met Museum in Manhattan, we are told, was dug up and transported in slabs, across The Atlantic.”

If actually from 79 AD, the costly container, the glass bowl holding the quince communicates to us like contemporary art. It is a picture reference to the wealth of the villa owner while also celebrating the multiple forms of whoopee going throughout Pompeii. Being a gladiator didn’t pay all that well, but being hired to boink an occasional senator’s wife made up the balance nicely. The working girls of Pompeii certainly had full time employment. Many of the early Christians of this period said the spontaneous volcanic eruptions and the burying of Pompeii & Herculaneum, within minutes, was the wrath of an enraged God. If so- He must have really loved what those Pompeian artists created- for the majority of the graffited interior walls were excavated perfectly intact, starting in 1760 and through The Late 19th Century.

Back to the bowl of fruit- maybe a restoring artist’s’ NYC joke, added in the 1960’s. Nowhere in any other example of Pompeii wall art do we find any life-sized items that invite us to reach right into the painted world, making it virtual in our dimension. If authentic, it is an even more profound example of artists reaching across the timeline, channeling art forms the rest of the world won’t be seeing for another 2-3 centuries. The entire room has as much movement, pattern and electrifying fun as every modern example of Street Art. The means are pigment buttered across wet plaster, a 79 AD technique very similar to 20th century aerosol cans and hand-cut stencils.

I want more Street Artist to recognize the great company they are in. Early Graffiti work, creating entire environments and Installations- funded by an appreciative however preoccupied culture, glorifying the beach homes of these vacationing Romans.

Also at The Met, a more dramatic Pompeian room, over 70% blackened like any typical subway tunnel is just 1 minute and 15 seconds away from the first famous room. Please use the zoom on your smartphone. We think it is pure, original Pompeian- but there we see exact hieroglyphic icons, lifted right from….The Egyptians. Plenty of sea trade was going on between Egypt and the Roman cities. And some rather lusty conquering, too. In the same way as graffiti lettering first crafted in LA only now to appear in Berlin, the Pompeian wall artists referenced Egypt and also created the ultimate whoopee room. Imagine this windowless room, candles flickering and all the carefully painted visual icons popping out of the darkness like 1st century PacMan- one that you lived in. And, eventually, slept inside of. 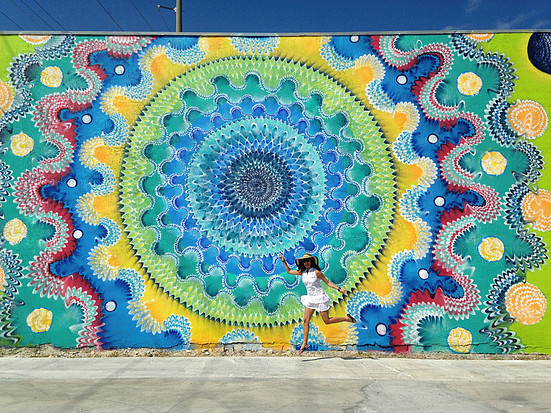 In the ‘80’s there was no such thing as Drawing or Composition in art school. The same way that hand writing is being thrown out currently, the practice of making something that looked like something was non-existent….and especially among the Ivy league college art professors, like the one I was at. (On work/study. Which none of my classmates ever let me forget. )

The NYC art-world that grew out of The East Village was endless blocks of 3-4 burned out buildings, then a storefront with a painfully austere gallery- very much a spaceship dumped upon the lunar landscape. The owners of these cultural satellites pretty much treated everyone in the actual neighborhood like we were Martians. In a cultural climate like that, the exhibiting artists desperately needed the pretentiousness of galleries to sell their boxes of cornflakes hand-sunk into resin with the thrill of live roaches parading to and from the art to the cracks in the walls.
Fresh from college, how was I to compete with this artistic splendor?

I taught myself to paint so realistically, viewers thought they were looking at the real thing- not a Realistic painted version of something recognizable- but the actual thing. This established my credibility as an artist fro across the room. And upper middle class art-lovers were spending way more money with Tromp L’oeil artists than any of The East Village or Soho gallery artists bragged about making. Now, as then, I was completely self-supported- so the kind of art I needed to create became very clear.

There is also a beautiful link between lush panted scenery of the 19th century European theater and current Street Art installations. Outside in the real world, converting an entire absconded building while integrating the exiting windows and doors into the actual design is Installation Art at its most authentic and exciting. But The Guggenheim is still propping up its boxes of cornflakes suspended forever in resin and fish tanks. Graffiti and Street Artists can teach these institutions.
As Street Artists recognize their own spontaneous, divine connection to the radically talented artists of the last 4 centuries, an organic increase in attention, representation and acquisition prices is impossible to avoid.

What I sincerely want to know is WHO is teaching street artists to make their epic, amazing, gigantic works of art LOOK REAL? There is no Street Art Trompe L’oeil class, even in Berlin, that I can find. Where is this passion to reinvent this forgotten element from Art History coming from? Do Street Artists feel as much outsiders to the real art world as I did throughout the shoulder-padded ‘80’s? Keith Haring and Kenny Scharff brought a large amount of interest and validation to graffiti, provided the artist doing the tagging on the sale-able gallery merchandise was as white as the original state of the canvasses.
The cave paintings of Lascaux are miraculous two times over. 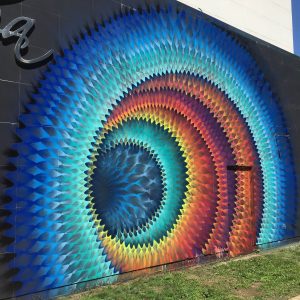 The current theory that is so genuinely controversial it has been completely buried by the Fine Art World- and, truthfully, any discovery that has serious truth as its core will be annihilated by The Fine Art world faster than any pile of bricks dripped with wax. This theory makes so much sense, that of course it has made 40 somethings, and older, quake with indignant rage. The fact that it, clearly, establishes a lineage to Graffiti and Street Art makes it unspeakably dangerous to- well, the entire foundation of Art History.

If the average human lived to just 20 or 25 years of age, then a 14 and 16 year olds would have been mid-lifers; adults in heir prime. The current concept: that the artists of these lush, multilayered images were packs of hormonal raging, shouting, carousing teenage boys- tagging their territories, only to have that series of images re-tagged by another band of pigment brandishes. In between nailing a bison or two for their tribe’s continuation.

The Caves of Lascaux are doubly validating because, since they were opened to the modern world 20 years ago, the radical introduction of humidity oozing from art-lovers pores and mouths (also known as breathing), began a decomposition process of the 3 gazillion year old images that put every art expert into a frenzy. We will examine tromp l’oeil / “to fool the eye” in the next section, but it is very inspiring to me, to see the French rising to the occasion, utilizing art to solve the problem. When we visit Lascaux currently, above ground, we find an entire recreation of these actual caverns. Reproduced by contemporary artists to exactly replicate the original caves below. Art and living artists were hired to graffittize the fake cavern walls to the point where they are identical to the walls below, that we can longer enter for ourselves. 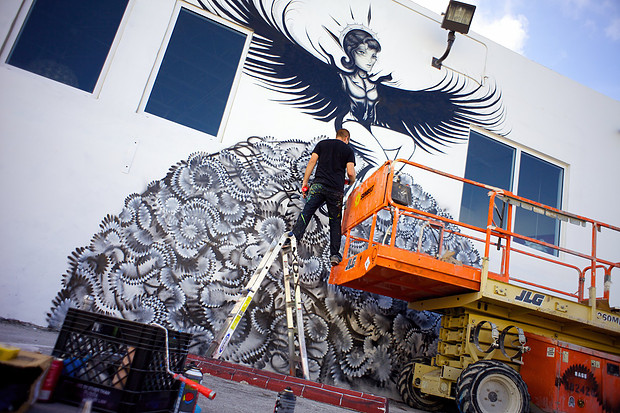 Bewildering, vast and fantastic, the original subway tubes of downtown Los Angeles were sealed because of culture terror and gang-inspired extra curricular activities. I envision these tunnels, recreated, as the cornerstone to the museum I want to open out there. May Eli Broad continue to collect the art-stars and share them with us in tax-incentive abundance along Eli Broad Boulevard. These sealed graffiti tunnels, painted in the 1970’s and forward- depict the same compositional elements we see as currently, officially sanctioned Street Art from the early part of this new century. The proof is inside those caves.

The term “graffiti” has come to mean illicit, but prior to spray cans and land owners drowning in grotesquely inflated property taxes, graffiti was the term for any type of recognizable image scratched into an upright surface. The Catacombs beneath Rome, Egyptian tombs and their wall-sized comic book strips, the term “graffito” became very popular during the golden age of radical artists in Florence- The Renaissance. 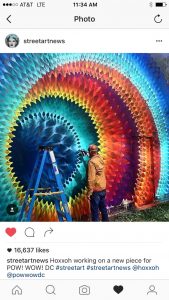 See more art from Douglas Hoekzema (aka HOXXOH ) at www.elhoxxoh.com or on instagram

“there he will leave his unique brand, a work that looks for different …