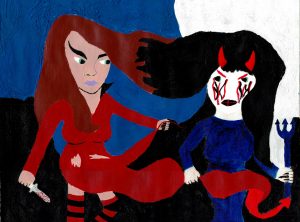 The latest fad this season as far as pets are concerned, says an advertising feature broadcast at the same time on the two state-owned television channels, after respective documentaries: on Silicon Valley, on channel 1, and another called Career Opportunities in Spain, Part I, on channel 2. It’s a guide rooster. It is the result of a long and costly genetic engineering project backed by 100% Spanish capital: deeply Spanish R&D. This new variety of gallus gallus or common European chicken, some seventy centimeters tall, with the same arrogant appearance and head adorned with a red comb, thick and usually erect, has a series of substantial and pragmatic differences for their new use as a pet.

They are designed for a highly diverse target of potential users, all of them with a common denominator: they like to go out for a few drinks, in any state, place, or circumstance. Partaking in -copious or not – alcoholic ingestion but responsible enough to not drive home, even so.

Thanks to this new genetically modified rooster, you can drink without later -spacial or temporal- location problems. The guide rooster -supplied through modification with a remarkable ability to pull – will guide you at all times throughout the night, bar to bar, and will bring you home safe and sound at the end. Once vaccinated and with the pertinent obligatory chip implanted, you’ll only need to clip on a special rooster leash and give him clear commands. He’ll understand. The stuff of trial and errors at the hands of a group of persevering and methodical scientists.

It should be taken for a walk around the area to be frequented to get familiar with it, and be shown a map of the neighborhood and/or town beforehand with a series of basic directions. And you should introduce it to your circle of friends, so it doesn’t feel left out.

They require a very Spartan keep, basically corn – also compound feed-based – and water. In that respect, several establishments in the hospitality trade at the national and international levels have joined the initial proposal put forth by some bars in the area of Malasaña in Madrid which consists of placing bowls with corn on the bar to give to the guide rooster right next to – with the hope of creating symbiosis, and economies of scale – the popcorn bowls for their owners.

The idea is to create a certain atmosphere in any given bar, of an undeniable comic element for the person who bumps into a situation of this sort for the first time upon walking into their local watering hole. The rooster is just as useful for dating: a shared fondness for the same kind of pet is as good a way as any other to break the ice. And, of course, it acts as an alarm clock in the traditional method – if you have early obligations to attend to the next day-.

Other benefits of the recent lab pet which came about unexpectedly a bit collaterally: if you have a rooster with a certified pedigree it makes you a little chic, makes you different. As with all things, there will always be classes, and everyone knows the unspoken rule in Madrid that you can’t get into places like Bangaloo, Gabana, or Vanitas with a common street rooster. Not to mention if you go to Cock, on calle Reina. It has also been a great help verbally alleviating daily tensions, if needed, without having to engage in fisticuffs. “I’ll sic my rooster on you,” has been, it seems, a leitmotif of their owners in recent times.

Another practical side of these lab roosters, after ruling out options like bricklayer roosters, or automotive driving industry operators, on the one hand, or, on the other, hunting or fighting roosters – due to economic unfeasibility in the first two, due to legal issues in the second two – has been to train them as police roosters, continues the advertising feature. Used in the different State law enforcement as narcotics, intervention, rescue, or forensics roosters, they were given characteristics genetically like an incredibly acute sense of smell and tracking ability – of cadavers, explosives, and drugs, for example -, as well as for crowd control and lifeguards, among others, mentions the aforementioned televised spot in closing. Afterwards, a clearly revival-type program on channel 1, with interviews with famous Spanish inventors: foosball, Chupa-Chups lollipops, and the yarn mop. On channel 2, the Career Opportunities in Spain, Part I, documentary continues.

Both varieties of rooster already discussed, guide and police – in this case more Spanish military police -, were bred for the first time Friday of last week in a raid led by this worthy force in Xandú on the premises of the El Trébol chain – leading brothel franchise since 1999-, as several panels attest to of the snow-inside-mall located off the Extremadura highway-.

In the aforementioned raid, a stash of drugs was confiscated. Several guide roosters were also seized from El Trébol customers. Reasons ranged from not having a chip, coming from some illegal lab, or belonging to an endangered species; some of these roosters were admittedly hungover a few hours later; some shallwesay laying hens were commandeered on the premises as well. All the fowl were classified at the police station as stateless.

“That’s interesting, stateless, I’ve never heard such a sad word or expression before,” says the sergeant in charge of locking them up – as well as of general maintenance of the station’s farm – out loud. He only finds that He never gave me a name the monster Frankenstein mourned, defeated, no going back, in reference to his creator comparable to it in terms of absence of identity, notary engaged with disaster and mass disappearances, pure and simple, in the rough.

The next morning, in the aforementioned military police sergeant’s apartment. He is making breakfast: soft-boiled eggs on his boss’ tray – a rose as well: anniversary of their first dinner, at the Galaxia café – and Corn Flakes on its own tray; coffee for both. On the TV in the kitchen, a documentary on channel 2: Career Opportunities in Spain, Part II.

Meanwhile, his captain finishes sewing a button on to his government-issued leather jacket at the same time as he is briefed on their next trip together to southeast Asia. The night before it – actually a few of them – popped off as two prostitutes from El Trébol tussled with the sergeant. A police rooster, shocking both of them, in the kitchen. Fear and trembling. It is no minor event, after all, to unexpectedly find a rooster staring at you and then at the two breakfast trays and then again staring at you and then at both of their hands – which touch, interlaced -, and then up to their eyes, with a decided expression of growing reproach.

But they did not pay attention to him for long. A sudden and thunderous fowl symphony called the sergeant and captain to attention. The noise was coming from the living room, which the two of them approached with their government-issue weapons. There they found a team of thirty police roosters surrounded by dozens of bundles of cocaine: pecked right open. Fifteen kilometers from the police station’s farm, such was the immoderate development of their tracking abilities. The content of the bags was scattered all over the room: it gave it a

certain aesthetic of fowl farm; the psychotropic drug acted as a stand-in compound feed. Some of the birds took on something-like-a-certain-ghostly-touch by almost completely coating their plumage a back wall white color: the roosters were, apparently, pretty hungry. That or the feed was pointedly addictive.

The sergeant and the captain looked at each other circumspectly, open-mouthed, surprised. The roosters continued feeding. And they clucked. A few paid homage to the pre-constitutional flag in the living room and sang Cara al sol. Others at least were reciting Pessoa.

Barry Southerland is a Chicago artist better known as the creator/curator of Delicious Demon House, an artistic asylum for his illustrations and paintings. His influences are Gilbert and Jaime Hernandez, Daniel Clowes, Gerald Casale and the visual and set design elements of 70’s European horror films. The best way to find him is through the DDH Instagram page (instagram.com/deliciousdemonhouse) and  the occasional art show and market throughout the city.

A LYNCHING NEAR THE COLLEGE

A LYNCHING NEAR THE COLLEGE The ghost tree reflected in …

Fore’ U Shoot Me Down…

Poetry and Video by Zo-Alonzo Gross   Fore’ U Shoot Me …