A moment of pain and the aluminum cane falls from my hand and clatters to the sidewalk. A mob of downtown shoppers flows around me, hurrying to take cover from the spring downpour. No one bends to pick up the cane. With my good foot, I slide it against the restaurant’s front wall. Damn thing doesn’t help much anyway.

Inside, the red-haired hostess wears a pasted-on smile, talks with the waiting patrons, takes their names and the number in their parties and records it on a list. She ignores me, as if I’m still pretty enough to compete. Somewhere in the throng, a baby lets loose a high squeal. I don’t blame it…I hate crowds…and waiting for anything.

I turn sideways and squeeze between two fat women. They never stop chattering. A row of hunched backs lines the bar, fills all but one space. Grabbing onto the counter, I adjust my skirt and hoist myself onto the stool, its seat still warm from the previous occupant. I study the breakfast menu printed on the placemat, can barely afford a short stack of buttermilk pancakes.

The woman on my right raises a bejeweled hand and a Latino busboy hurries to refill her water glass. I do the same. He turns and walks to the far end of the bar and talks with a pretty blonde. Waiters and waitresses slide back and forth in front of me, like tin ducks in an old time shooting gallery.

“I’m ready to order,” I announce but none of them stop. 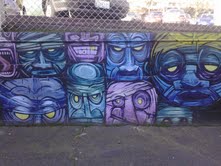 The creepy guy on my left slumps in his seat, his belly pressed against the rail, shorn head tipped forward. He wears a wool coat and scarf that looks a lot like mine. His hat, sunglasses and beard hide most of his face. Ketchup smothers his partially-eaten breakfast, making it look like some kind of bloody crime scene. A newspaper lies folded next to him.

He doesn’t answer. He’s probably hung over, recovering from a lonely Friday night. I unfold the paper and stare at headlines: “Poverty at an All-Time High,” “Suicide Bomber Kills Twenty in Bagdad,” “Republicans Push for Social Security Cuts.” Refolding the front page, I look for the classifieds. The guy next to me hasn’t moved. 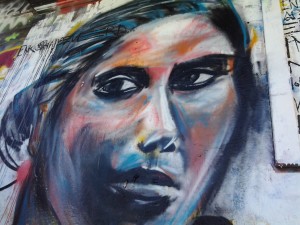 A waitress passes and I reach out to touch her shoulder. She’s right there, but somehow I miss and she moves away. I hate waiting for service.

Pushing back from the counter, I slide off the stool and almost go down. The guy next to me grabs my trembling arm. My gray wrinkled image reflects off his sunglasses.

“Thanks. I coulda broken my damn hip.”

“You’re welcome. Aren’t you going to stay for breakfast? I hear the pancakes are delicious. The last guy really loved them.”

The restaurant noise sounds strangely muffled. “No, I seem to be invisible.”

“Suit yourself.” The guy turns and resumes his former pose.

I edge toward the front entrance. Behind me somebody screams. The blonde waitress stands in front of the weird guy, staring openmouthed at the motionless figure. The crowd’s roar drowns out my groan. The hostess looks pale, shaken. I push through the door. Outside along the empty street, rainwater flows in mirrored sheets across the sidewalk. I can almost see my face in one of them. But red and yellow flashes destroy the image. I look up. A silent ambulance barrels down the boulevard. My cane has disappeared.

Choose Your gods Wisely, because they are Only Men