Art and Literature by Serafin Borgia 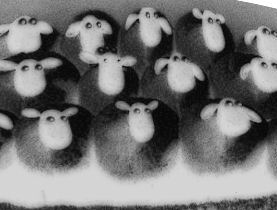 While the world burns, sheep warm themselves on the fire or prance about merrily, unconcerned with anything but their fluffers, carbonated drinks and aggressive- nonsense games. Between the glossy images of meadows, high- speed sunshine and audio of bubbling brooks, lies the slaughter house and death camp. Up above, their sky is fully loaded and programmed to kill.

The ranch stinks like rotten shrimp boiled in valerian tea. In the afternoon heat, the fermenting blood of the obedient, mingles with the stench of complacency, forming small twisters and stubborn greasy clouds that waft into your nose, burn your nasal hair and smogs the air.

The pastures are brittle, rocky- ground glowing fluorescent green from the toxic spills. The sheep think its just grass. There’s an orange hue in the stagnant brooks from the Uranium dumps. The sheep still drink it. Twice a day we drop genetically- modified hay, processed 100 times, on the valleys and watch it slither on its belly to the troughs and surrender.

The barns are a marvel- A sick, glorious tribute to all things Orwellian with Machiavellian

Accents. There’s plenty of lights and shadows, but never the ‘thing ‘ itself, merely bells, whistles, dings, blips, hype without justification- a cool and silvery Fabian detachment – drowning the unmentionable  memories of truth.

Recently, there’s been updates to the piped in (pseudo-) moods, fresh hormone gas and sedative sprays. Each complements a variety of altered realities decorated by deep valleys of synthetic trees and flickering flags. The pre-programmed artificial scenes salute and bow when called to formation.

To convince the sheep their blinders are a necessary accessory, designers added some sparkling stones and released limited patterns with bright colors and shiny fabrics. Sheep now stand in long lines, even in inclement weather, to buy the overpriced eye-shields that prevent them from seeing.

About every four years, expect a spectacle, a real carnival and rambunctious freak show, a lunatic- fringe witch’s brew. Their imaginary political campaigns sink neck deep in meaningless banter, bordered by cheap sigils, animal mascots, waves of absurd proclamations and dead promises crashing on the shores of the hate rallies they call debates.

How quickly they begin turning on each other, rallying around stupidity, basing for ideas, blabbing about all their ‘isms,’ theories and illusive dogmas. Their trite debates are repetitive, sometimes even comical. They haven’t evolved one bit since the beginning. It’s always the same argument, merely different catch phrases and provocateurs.

Between these brouhahas, there’s a significant amount of down time: Monotony and deference prevail. Echoes of baritone-ing drums torment, then lull the bored field guards. Meanwhile the sheep march in infinite circles; chanting “Ho-Hum-Ho-Hum, We Choose to Be So Dumb.”

Our sociologists can barely keep their eyes open, even when conducting interviews or broadcasting the daily directives the sheep call news.

Again and again sheep cling to their myths: creation myths; hope myths; evolution myths, new world myths, etc…. They exaggerate and recreate them to keep them alive, then deteriorate into sentimentality about their constructed history and false nationalism, superiority of the long hairs to short, rams to ewes, white to black, crème to beige.

It is always the same: Simply new words for the old scripts. 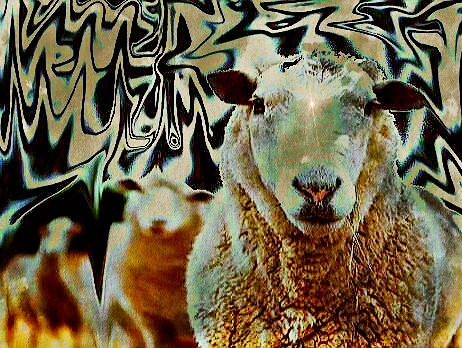 There’s several popular choices for thought blocking and creative suppression. I believe they call them churches, temples or mosques. The sick artists that created them are long gone, having committed suicide or dying in drug and alcohol related incidents. I think one even buried herself alive.

The lack of analysis and rationale thought increases each year. We’ve had to conclude the sheep are either very dumb, suicidal or both.

As far as the subversives, mainly the few creative, philosophical, science minded and independent sheep, they have been occupied and put out in the furthest pastures . Their ‘artistic/consciousness’ movement, has been constrained and subjugated, tainted and separated blocked from evolution.

Images, music and literature appealing to base instincts and/or stopping short of any true expansion of consciousness are repeatedly broadcast in an environment where it is taboo to pay for creative contributions. And the true artists wither and eat their art for sustenance.

Years ago, the ‘Beat-Up’ campaign helped create the popular ‘starving artist/ anti-establishment creative-‘predisposed ego. Rather than martyr these stronger personalities, we chose to dull their credibility and allow them to fizzle out. We also introduced mind numbing substances such as heroine and strong alcohol to stunt and distract those that have true potential and resist normal programming.

The sheep don’t mind. In fact they guzzle it…

Occasionally, there are genuine uprising events- some sort of a movement  about liberation, freedom, less control, environmental issues, a concept they get emotionally involved with and are willing to fight for. Sometimes they’re even industrious enough to blend all the complaints together into a collective. But it’s easy to pick apart- The leader’s egos get in the way and you end up with small, divisive, bickering groups that eventually accomplish nothing; Further proof they are firmly attached to their labels, and ‘isms’ more than their potential.

In the unlikely event they are non-compliant, drum up the wrath. ‘Retaliatory War’ is the most commonly used script. The authorities can easily integrate elements of the other scripts into it and quickly label those that disagree- dissidents, subversives, and/or terrorists.

The sheep don’t mind, seems many of them anticipate the shifts and quite enjoy what they call ‘‘The Drama.’

Subjugation of the ewes, for longevity, is simple. Without much thought, the sheep repeatedly hand over their future to be herded into a joyless barn and acclimated to our no-thought conveyor belts. There’s no uprisings, even when we have to do random cullings and frequently use their young for public brutalization tactics.

The sheep’ baa and blab’ about the value of the elderly and disabled, in their (so-called) society, but these groups are not a priority, and they will not adjust their ‘lifestyle’ to care for them (regardless of what they say). Simply keep the majority of them out of sight, heavily drugged, and let a few loose from time to time (holidays are best) to activate their shallowness and false-empathy programming.

Soon we’ll operate uninhibited, and completely step out of the shadows without fear of smudging our boots or wrinkling our deep pleats. Soon we own it all.

Wherever you look, you can see the slick gods of dominance rising to supervise the new world taking order. Still, some of the shepherds suffer attacks of sentimentality leading to epidemics of consciousness then strong wafts of hard guilt.

In such instances ranking authorities must immediately rush in to remind them that there are no  contemporary ideas, merely love and lack (or simply us and them);That the guilt- Is primal- feels like your umbilical pulling, and that the quickest remedy is to simply turn away, wait till the compassion flickers out and don’t look back .

And there’s no need for guilt -The sheep don’t care, don’t mind and don’t even want to learn.

I’M WITH YOU IN QUITO

Art by Cindy Press ♥ Poetry by Michel Fuseau I am …