One Septembers day many years ago the rain punished the street outside while a grand blast of heat came from the hearth in the corner of the pub. Myself and my drinking companions sipped away in the warm confines of Bradley’s pub and it being Monday evening the place was quite, the only buzz was coming from outside as cars and pedestrians were rushing up and down Barrack street on their way home from work, school, college and all such places alike. As the rain hit hard on anyone unfortunate enough to be caught out under it, a small paunchy figure appeared in the doorway of the pub, it was Bud Sweeney.

In came Bud all wet and sour looking with the rain that had spat its load on him. He immediately made his way to our table when he spotted us with his tired blue eyes. He passed the bar and I knew that Bud had something very grave to announce to us, for surely he wouldn’t have passed the bar otherwise. 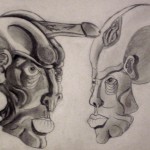 ‘Rotten evening to be out in it Bud’ I greeted him as he sat his drenched frame on the one free stool that was at our rickety old table. ‘Oh I have an unbelievable story to tell you all’ he said in a very serious tone. ‘I am sure you do’ said the ancient Mrs Crotty from across the table, ‘sure you weren’t seen at all yesterday’ she said while bringing her glass of stout nearer and nearer to her old narrow mouth. ‘Oh I must tell you all why’ Bud replied and then he set about telling the tale of his Saturday night abduction.

Bud took a deep breath before launching into his bizarre tale, ‘To begin the story it was Saturday evening and after my dinner I was going to spend the rest of my Saturday on the couch watching TV but instead of doing that I decided to go out for some postprandial drinks. So off I sauntered down to the Southside inn as it being nearer to my abode and I only had one and two pints of stout in mind. I went there anyway and I had two pints but I had found myself in buoyant mood with some good company and sure you know drinking is like the world of the dead, there is always room for more. So my two pints of stout were doubled and trebled by ten o’ clock and by midnight I had quadruple that. When the time came for last call I had my throat nearly worn out singing songs, some out of tune others I just didn’t know the words to but by an hour or so after midnight the barman had no other choice but forcibly exit me out of the public house but he got some fine festering curses in his ear for doing so. As I staggered and stumbled my way up the road going home, I heard something coming from behind me. It was a low purring noise coming nearer and nearer so I swung myself around to plant my eyes on what it was but instead my eyes were blinded by two bright lights. The next thing that happened was the appearance of two big figures who handled me in the most discourteous manner and before I knew what was happening to me I had found myself locked into a room. Oh it was a cold place all grey and gloomy and I thought to myself that this is it, I‘m done for! I thought what would the wife at home be thinking!? She would probably think that I had run off when in fact I had been abducted while I was making my drunk walk home to her. Yes my friends I was abducted by these strong characters and believe me they were strong because I tried putting up a fight but alas with me being so over the top intoxicated sure I had no hope against them. So anyway I panned my body out on the floor of this room because I had destroyed myself with tiredness as I howled and kicked at the door for what seemed hours without end. Some time later I was awoken by the big steel door that swung open and I was told to get out. By then I had the most horrendous hangover tearing shreds out of my mind and not to mention tearing shreds out of my stomach but by noon on Sunday I had eventually made it home where the wife tore strips out of me, worse than any horrible hangover let me tell you!’

Bud finished his story which had us all sitting in stunned silence until I spoke up. ‘So Bud are you telling us that aliens abducted you last Saturday night and took you aboard their space ship??’ Bud, still wearing a very serious expression on his face shook his head, ‘Ah no not all!’ he stated, ‘It was the police that picked me up and threw me into a cell to sober up!’ Yes as I already told you, Bud Sweeney was a rare one indeed.

The author: Lily Murphy is 24 and comes from Cork city, Ireland. She is a B.A graduate of University College Cork. Lily has had some pieces of fiction appear in publications such as Hulltown 360 journal, The Delinquent, The Toucan, Pot Luck magazine, Pom Pom Pomeranian from Bank Heavy press and Ephiany magazine. She also contributes articles on culture and politics to Monthly review, New Politics magazine, 4Q magazine, Ceasefire magazine and the writing disorder.

Under the Neon Cactus

Shadows in the house of lights

Stanley Morris Noah – Dallas,Texas Shadows in the house of …