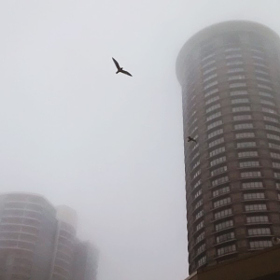 The cashier says, “Have a nice day.”

I whisper, “Sorry I have other plans.”

In the parking lot an ancient pilgrim

She is streaming epithets.

I find the car.

Geno is sprawled over the front seat,

to a poem tellings how horrible it is

living in the suburbs with a female lawyer.

And the awful neighbor kids &

I start the car & turn toward the exit.

The ancient pilgrim is still leaning

into her cart as if into a high wind.

“I slash throats with a garden hoe,”

screams Geno. I stop the car.

“I crush skulls with a fireplace brick.”

I get out & say hello to the wayfarer,

her teeth slip, I lift her cart over the

gouge in the earth.

her fist to strike.

I jump back in the car.

Geno is still ranting his poem.

“I eviscerate the little bastards &

roast their guts for the dogs.”

Canto XVII to be exact:

“Those who have done violence to art.”

As we round the Long Beach Traffic Circle,

I suggest Geno call all the neighbor dogs Cerberus.

CHAOS AND THE COMMON MAN

Out my front window I watch a man

cleaning rainwater off his car’s windshield.

Stoically he disregards the weather

as traffic flows about him.

partaking of some kind of ritual

that tells the mind I’ve cleaned a scrap of dirt

off my little piece of this world…

I’ve done something! I am not part of the chaos.

Again I look out the kitchen window,

and he still stands like a stone in a stream.

Yes, he has the audacity, the balls, to stand

as if he has all the friggin’ time left in creation.

I have a second cup of coffee.

that just piss me off.

down on their knees

cleaning a smudge off the carpet,

Park Rangers picking up leaves in the forest. 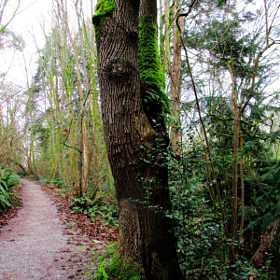 cup of coffee. CNN is showing

smoking in the streets of Iraq.

Telling myself that caffeine

into reflecting on chaos.

I decide to consider uncertainty,

Then the lilies of the field,

Then the Aurora Borealis

I pour the remaining coffee into my cup.

Here we are on a one-way trip

pushing into a perplexed cosmos,

a cosmos spinning into, or out of,

then extrapolate on a black hole in space,

a rip in the universe…sucking all of us

into an eternal vortex.

The rest of us stare from our respective windows

at the devastations of the ignorant. We see a

the Savage Armies of Night race across barren

sands till they crash into a thing called eternity.

souls are being weighed against a feather.

I finish my coffee—the old man drives off.

Chaos is much closer than I thought.

When The Storm Hits

The Power Principle and the Dangers of Hierarchy

by Adam Brown I noticed the recent story about the …

The mystery of how to start a company