Tell the people who you are and where are you from?

I am originally from Sudan, and have been living in the UK for the last fifteen years.
Can you tell us about your latest project?
I am currently working on a children’s book series of the Arabic alphabet. Which consists of the letters and their corresponding words.

“I am doing something different to traditional Islamic calligraphy, rather than stylized graffiti. I am combing street art with it. “

How I do it, is by incorporating the word with the embedded image that it already has.
For example in English, the word tree has an immediate visual link to it.
What I do is marry the image of the tree to the actual four letters of the word, and try to make it clearly readable and appealing. Which I think is best when doing any calligraphy.
What message do you want people to receive from your artwork?
I hope and try to elevate people’s souls and stimulate their minds intellectually at the same time.
Which is why sometimes I put words of poetry and wisdom in my actual work. Other times I leave the viewer  with just the artwork and hope the message I intended is clearly  communicated.
Do you remember your first creative work, the moment you knew that you where an artist?
I believe everybody is an artist.The way we talk, walk, write, how we dress. We’re all expressing ourselves artistically.
People gravitate towards different Artists in different fields, for instance speakers. People have always inclined towards people who can express themselves eloquently.
Before the television or radio people Would flock to hear presidents debate such as Lincoln and Douglas debates.
Similarly, People would gather in thousands in auditoriums, to hear poets and great writers such as Mark Twain, Charles dickens, and Ralph waldo Emerson give speech.
Those who practice their way of expression through out their life’s stand out. Because they have attained a high level of practice, some have reached excellence and are given acclaim for it.
Who are your favorite artist and inspirations?
My greatest source of inspiration is from my faith in God, and the teachings of Islam. It’s what drives me as an artist, gives perspective, and purpose to why I make art every waking day.

There’s so many artists who’ve influenced my work to list. However, I believe the distinct two looking at my work . Who I can clearly see their finger prints, are banksy and Jean Giraud, especially banksy. 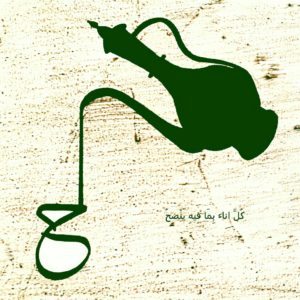 Vessels Can Only Four forth What They Contain

From banksy I took the simple silhouette Style which I maintain. I also try to integrate his humor, and the intriguing aspect of his work.
I love jean giraud’s art. His styles have been many, and very versatile throughout his life. But what I really admire is the surrealist otherworldly perfume in his artwork.
What tools do you use to create?
I use a variety of tools and prefer not to limit myself to one. initially, each idea starts out usually with a small thumbnail drawing in pencil. Then I complete the design sketch by adding colors of paint or other materials.
Sometimes I experiment with collage and Photoshop . I believe to grow as an artist you have to leave the familiar and try new things constantly, otherwise you’ll stagnate and won’t innovate.
Where can we hear more of your art, what other places has your work been published?
You can find me on most social media platforms. Including Facebook  and twitter. The name of my Instagram  is khalidelsirart
My work has not been published to the public before officially. This is the first time.
What do you hear yourself doing in 20 years?
For me art and life is a spiritual journey, its a spiritual journey away from the peripheral to the centre.

When I was sixty, my ear became obedient. When I was seventy, I followed my heart’s desire without deviating”.
I Hope and pray to arrive closer to that destination.

You know the answer to that question already. It would suffice me to just watch the great master Leonardo Da Vinci in his day. Planning,designing, inventing. That would be a joy to watch.
Any last words you would like to say to the Section 8 Magazine readers worldwide?
Keep striving for excellence in whatever it is you do, and always  try to see the world as a saint would, and not as a cynic. You’ll be happier for it, and the world will thank you for being a subject of history and instead of an object of one.
About Section 8 Squad 573 Articles
Global artists and writers dedicated to sharing creativity around the world.
Website

The House with Blue Shutters on Lattimore Street

We killed them   Artists don’t sit inside all day …