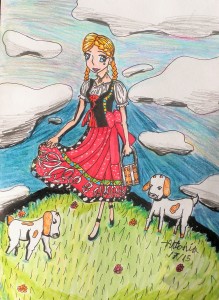 Patience was misnamed. Rage, Anger, or Wrath would have been more apt. Clearly her mother was in an optimistic frame of mind when she chose what to call her unwanted, unplanned, and unusual child. That her existence came as a surprise didn’t mean love was withheld. Patience was cared for, tended, never shunned. As she grew, it was her mother who wished to possess the quality she’d named her child. Patience was difficult, rambunctious, seldom at ease with her own skin.

Her teachers were the first to sound the alarm. Patience was perfectly intelligent, they said, but showed no interest in learning. She seemed to have contempt for the whole process. Patience declared to her baffled mother that the teachers in the snow school across the road gave their students homework. They had class trips and assemblies.

How Patience knew this was unclear. Snow people didn’t mingle with mud people. They kept to themselves, and Patience’s people were expected to do the same.

No point in worrying what goes on over there, her mother said. It’s not for you, or me, or any of us.

Why not? I’m just as good as they are!

Because. It’s always been that way.

Then I’ll cross the road. I’ll go to that school. I’ll learn what the snow kids learn.

Patience, no! You must not cross that road! Snow and mud don’t mix!

What bothered Patience is that her people did cross the road. They went every day to clean houses, iron sheets, cook, and take away a few coins and bills placed on whatever surface was near – a counter, the top of a barrel – but never into the hand, for snow must not touch mud.

Snow can melt, and mud can harden, Patience thought. It was Patience herself who hardened, but only on the inside. Outwardly, she seemed to have adopted a spirit of quiet resignation which pleased her mother no end.

Time passed, as time always does, and things changed for the mud and snow people. A new spirit of cooperation and acceptance seemed to prevail. Snow people and mud people became friends, business partners, even lovers. Sometimes they married. A new identity seemed to be at hand, and Patience, now a community leader, sought a new vocabulary – a new name. Mud people were descended from the earth, the rich ground from which food came, and Patience advocated being called Children of the Soil. When that was too long, and thus inconvenient, it was shortened to Soil.  Snow people wanted a name change, too, and since snow fell from above they became Sky.

For a while, everyone was pretty happy with their new names. Then trouble started again because Soil was always lower than Sky. Patience tried to impress upon the citizens of her town that both were equally necessary to survival, and so both should be treated equally under the law. Patience was older, her hair was streaked with white. Yet her passion for justice was as strong as ever.

While the law came to recognize equality, the hearts of human beings did not. Soil was still considered less valuable than Sky. And because the peacekeepers were usually Sky, further trouble ensured. Rights, once briefly respected, were ignored. Young Soil men, unarmed, were shot by Sky police who later swore that they believed a weapon had been in hand. One horrible mistake could be explained as simple human error. But the trend continued. Soil feared, Sky reigned.

In a city by the river that cut the country in two, a young Soil man walked down a street. The street appealed to him. It was open and wide. Traffic was light, he wasn’t concerned for his safety. The day was warm, the world felt gentle. Until a Sky police officer drove up and told him to stop walking in the road. Is there a law against walking in the road? Soil asked Sky. The officer repeated his request. His voice grew loud. The world wasn’t gentle. A final command was issued, a shot fired, a Soil man was now down in the street. The Sky officer claimed self-defense. The Soil man charged him, clearly intending to do him harm! Certainly he’d had a weapon, if not in plain sight, then concealed somewhere on his person. No weapon could be found, though, and the Soil community raged.

Patience brought her people together. They held a vigil. They sang. They walked arm in arm to the Sky police precinct, where they were met with two Soil police officers, who knew that they were tokens, yet acquitted themselves with honor and respect. The crowd was allowed to remain in place, singing, taking turns speaking at the podium that had been set up at the suggestion of the mayor. He promised a full investigation. He assured them that the matter would be handled fairly.

Patience knew there was no fairness. Her people knew it, too. They spoke of retaliation, of causing mayhem and strife. They would arm themselves in protest, and for their own protection. Patience counseled against it. Only greater anguish would result.

Night fell. Patience tied up her hair. She washed her hands and feet. She put on a clean white dress and a necklace which had belonged to her long dead mother, a string of amber stones separated by silver balls, the only thing of value Patience owned.

The pavement was cool against her bare feet. She entered the street where the Soil man had been slain. On its surface were the invisible footprints of her people as they’d walked together in song. She walked on and on in the night. The police car approached her slowly, its lights dancing in the dark. The voice commanded her to stop and to come no closer. She raised her hands, walked on, waiting for the sound of gunfire, then willing it to come.

What Is Found, What Is Lost: A Novel (She Writes Press, October 2014), Finalist in the Literary Fiction catory of the 2015 International Book Awards, Our Love Could Light The World: Stories (She Writes Press, 2013), Finalist the short story category of the 2014 Next Generation Indie Book Awards; Finalist in both the 2013 International Book Awards and the 2013 Best Books Awards, All The Roads That Lead From Home: Stories (Press 53, 2011), 2012 Independent Publisher Book Awards Silver Medal Winner Check out her Website:www.anneleighparrish.com Twitter:  www.twitter.com/AnneLParrish Facebook:  www.facebook.com/AnneLeighParrish

The fight for our rivers, mountains and forests

THAT JUNE IN PARIS DAHLIAS WERE LARGE AS DINNER PLATES