I crawled out of bed and went down to the gas station to buy a newspaper and a coffee. Then I flipped through the help wanted ads. Sell tools from home, big $$$$! Laborers needed. Taxi drivers needed, be your own boss!
Society was complicated. It was filled with people who thought they understood what was going on. The more manifestoes that turned up, the more confused I was.
I got ready and went to a job interview. I took the bus. The guy wouldn’t tell me about it on the telephone. I found the address, a little hole of an office building. 3 Mexicans waited in the little entry room when I got there. I peeked into a couple of offices. No sign of life. A McDonald’s food sack sat on a desk in one of the offices, with a packet of French fries to the side. It seemed to me that none of this had anything to do with real life, with the real purpose of a human being, but it didn’t matter. I can’t let it beat me, I thought. Somewhere, a telephone rang over and over.

“He looked at my jeans and t-shirt.
“Thanks for dressing up,” he said, rolling his eyes.”

I sat down and waited with the Mexicans. Finally a small wiry guy with a gray beard came out of a door and looked at us. He was wearing a black shirt and a tie. The whole thing seemed absurd, but that was business.
Mr. Graybeard took the Mexicans into an office for an interview. All three of them at once. Then in about 5 minutes they all shuffled out again. They all looked a little happier than before. Then he called out.
“Matt Glasford?”
“That’s me.”
He looked at my jeans and t-shirt.
“Thanks for dressing up,” he said, rolling his eyes.
I sat down in front of the desk and the man in the black shirt and tie vaguely told him about an import-export job. He said he paid cash at the end of each day. Then he told me to come in on Monday, to “shadow” a current employee all day long, to see if I was right for the job. He claimed they imported thousands of items, including toys and knick-knacks. I was supposed to sell them. I was supposed to care enough to try to sell them. The man told me to wear a tie and show up at 9 a.m.

I took another bus to The Golden Nugget. It was early, around 5, and not many people were there. Sally was bartending. Sally was in a good mood, which happens about twice a year.
“How’s it goin?” she said, smiling when I sat down at the bar.
“Pretty good,” I said, “Why are you in such a good mood?”
“It’s Valentine’s Day, silly,” she said.
“Oh.” Valentine’s Day. Wonderful. Sally is dating another bartender who works there, Perry. It’s a cute arrangement, the way they both work at this bar and make all this cash money and are both young and good looking and lazy and kind of stupid and thinking they’ve got it made. They’ve been dating for 2 years. They are envied by one and all. They seem to have everything you could want. Their relationship is like a god damned blue print for happiness.
“I can’t wait,” Sally said, “to give Perry his present.”
“You buy presents for each other on Valentine’s Day?” I asked.
“Of course,” she said, “Jesus, now I know why you’re single.”
“So,” I said, sipping my drink, “what’d ya get him?”
“I got him a Ninja sword,” she said, her eyes widening and sparkling.
“Does Perry like swords?”
“Oh yeah, he’s really into swords, he’s been collecting them since he was a little kid.”
“Strange he never mentioned it.” I had known Perry for years. I had been a regular at this bar well before Sally ever entered the picture. In fact I had known the bartender that Perry replaced and also the bartender before that.
“The damn thing cost 119 bucks but it was worth it,” she said.
“Where’d you buy it?”
“The mall.” 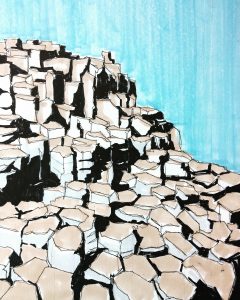 She walked away to take care of a couple of new customers. Then she came back. Then she glanced up at the clock. “Only ten more minutes,” she said, “And Perry is going to come and pick me up, and we’re going out to dinner, and then we’re going to my house to exchange gifts.” Her eyes were glazing over dreamily. I finished my drink fast just so she would have to walk away and make me another.
Pretty soon Perry arrived, smiling and talking with that voice of his that sounds like he took a mouthful of beer and didn’t swallow. He was all dressed up in leather jacket, 200 dollar shoes, hip and slick from head to toe. He kissed Sarah on the lips.
“Hi,” Sally said. “Look, I’ve got to run home, I forgot to get my camera. Can you wait for me here?”
“Sure,” Perry said, “I’ll just have a quick beer.”
“Ok,” she said, then she ran in back, got her coat, and left.
I looked at Perry.
“What’s up?” I said.
“Oh, this fucking Valentine’s Day shit has got me crazy. I mean, I hate being pressured into buying a present. And then I never know what to get.”
“It’s bullshit,” I said.
“I mean,” Perry said, “whatever happened to flowers and a note or something? And candy? What happened to fucking candy?”
“Good question.”
“I was at the mall all day today, and I just about gave up,” he said. “And now we’ve got to go out to dinner at god damned Anthony’s, and I’ve got to tip those snobs, those motherfuckers, and I’ve got to spend all this money for food that ain’t that great anyway.”
“So,” I said, “Did you buy her a present, or what?”
“Oh, shit-yes, I got her some kind of back-massager thingamabob. She’s always getting back aches, you know, and she’s always wanting me to give her back rubs, and sometimes, you know, I just don’t really feel like it, so I thought this thing might help take some of the load off.”
I laughed.

“The damned thing cost 140 dollars,” he went on, “so she better like it.”
“Well, she told me what she got you.”
“Really? Hell, whatever it is, it’s got to be better than what she got me last year.”
“What was that?”
“Oh, she got me a fucking Samurai sword,” he said, rolling his eyes.
I coughed. “A sword?” he said. “Why would she do that?”
“Shit,” Perry said, “last year she was bugging me to take her home to see my mother. So I did, and she saw my old collection of swords. I used to collect these swords when I was a kid. It was just a dumb thing, a long time ago. I never even learned how to use them.”
“A sword, geez.”
“Can you believe that? Is that anything to buy someone for Valentine’s Day?”
“I’m not really an expert.”
In a few minutes Sally came back in, beaming. She had done some personal touching-up while she was at home, and the perfume was thick. They kissed again. Then they left.
After that I drank and drank until nobody wanted to sit by me. Then I called a cab, and got one of those drivers that just wants to talk and talk.
At home I called my ex-girlfriend, Jeannie. Don’t drink and phone, don’t drink and phone, I thought. Luckily she wasn’t home. I left a message on the machine. Happy Valentine’s Day. I miss you.
I made some eggs. After I ate, the world was still there. I thought about myself as an old man, cooking for myself, cleaning for myself. Every once in a while I’ll have a little slip in the bathroom and I’ll think: that’s why people don’t want to grow old alone, they don’t want to fall onto the floor and die like that, with no one even to call the hospital.

I lay down on my bed and turned on the tv. It was not very late, still prime time. The Olympics were on, the winter Olympics. Salt Lake City. Men’s ice skating was on. Jeannie always watched ice skating and I learned a hell of a lot about it over the years, came to recognize the names and faces and styles of the stars. I learned the terminology and even acquired a certain appreciation for the sport. I even found myself enjoying it. Shame, shame, I know.
The male skater skated around the rink, and my head started to spin a little bit from the booze and the food. Then the skater went tighter and tighter with his circles, and so did my consciousness, until he was spinning like a top, and I lay there trying to keep my head from flying off. An ice skater spins faster than a fan blade. I lay there but I was miles away from sleep, because every time I closed my eyes the world came swooping in.
The phone rang. I couldn’t stand up. The machine answered it, and it was Jeannie returning my call. It was her voice, the same voice I’d heard for 9 years, but sadder. At least that’s the way it seemed. I lay there listening to her, but couldn’t answer it. She wished me a happy Valentine’s Day, and then waited a second. Then she said good bye and hung up. My stomach lurched. It was 9 o’clock. In Salt Lake City the audience was throwing flowers onto the rink, and everybody was crying except the judges. 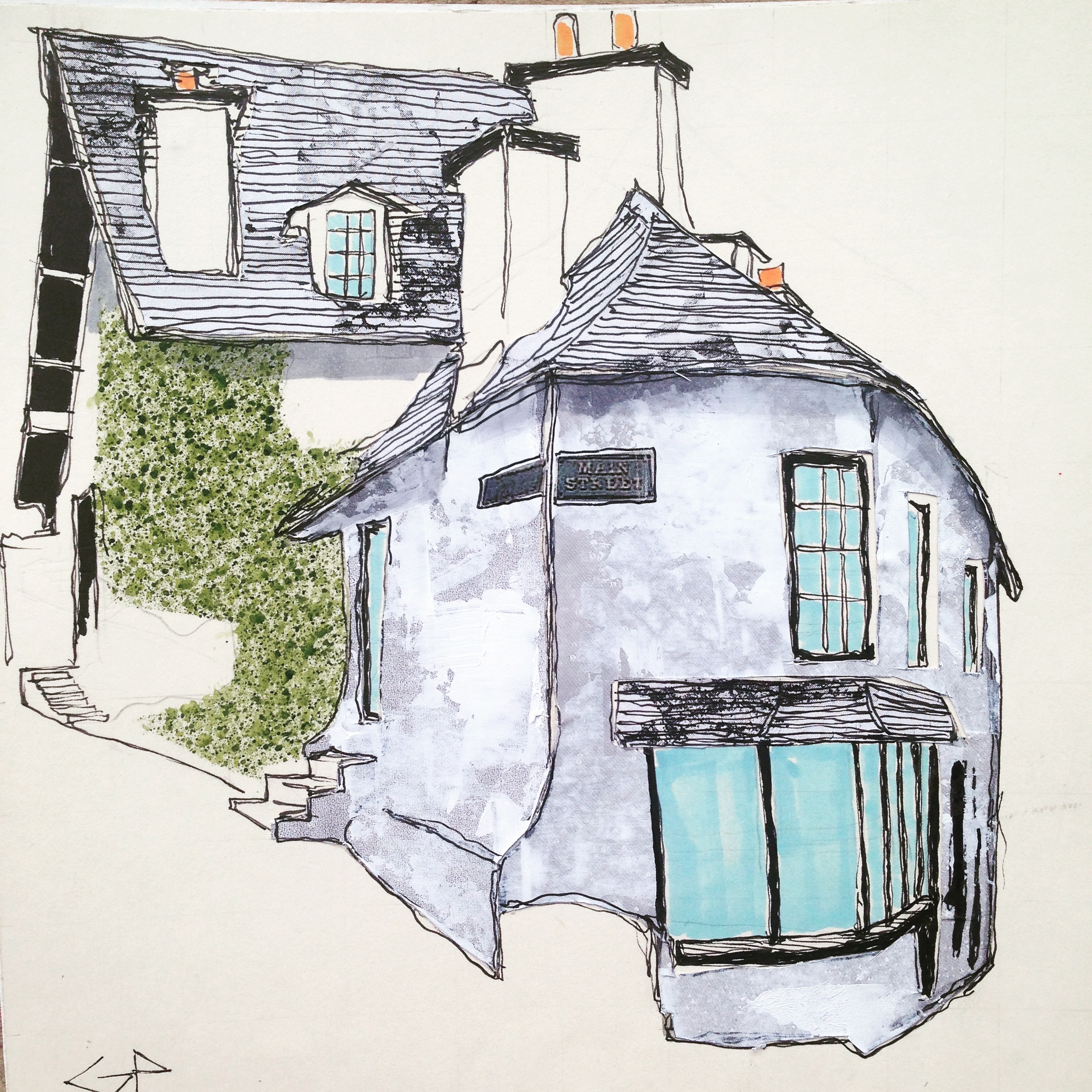 She Deserved It, and You Know It

Fiction by Alexis Betit — Photography by Maro Kentros “All rise,” the bailiff …